This is a summary of some of the activities and achievements we made during 2008. 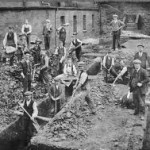 We first presented our vision for Inspire Middleton to begin laying the foundations of our work in the town.

We held a presentation lunch to launch our vision for establishing a Lighthouse Project drop-in centre in Middleton. Many people were invited including the local MP Jim Dobbin and his wife Pat, local councillors, all the church leaders, local charities and support agencies such as Home Start, Connexions, Sure Start, Heywood Middleton and Rochdale Primary Care Trust, to name a few, and also local businesses, friends and individuals.

Inspire Middleton was incorporated as a company limited by guarantee (registration no:6624568) and this gave us a formal legal structure from which to build and take our plans for working in Middleton forward. The subscribers to the incorporation were 4 founding directors; Mr Carl Roach, Mrs Michelle Lee, Mrs Janet Roach, and Rev Nke Eboma.

Inspire Middleton became a recognised charity registered with the charity commission (registration no:1126093). The objects of the charity were clarified and agreed as part of the registration process.

We prepared some introductory literature which explained our vision and intentions and started planning a larger publicity campaign for the latter part of 2009 based upon the idea – “I love Middleton… be inspired!” The intention of this campaign was to challenge negative attitudes in order to turn them into positive actions, and connecting and motivating people who want to see change in the town but are not sure how to go about it.

By February 2009 there were 14 individuals from 6 local churches who had decided to start the initial 12 months Street Pastors training programme with a view to going out onto the streets of Middleton by May/June 2009. As part of this work we have also facilitated a connection and working relationship with Middleton Neighbourhood Police Inspector Gary Hall who is very keen to support the work.